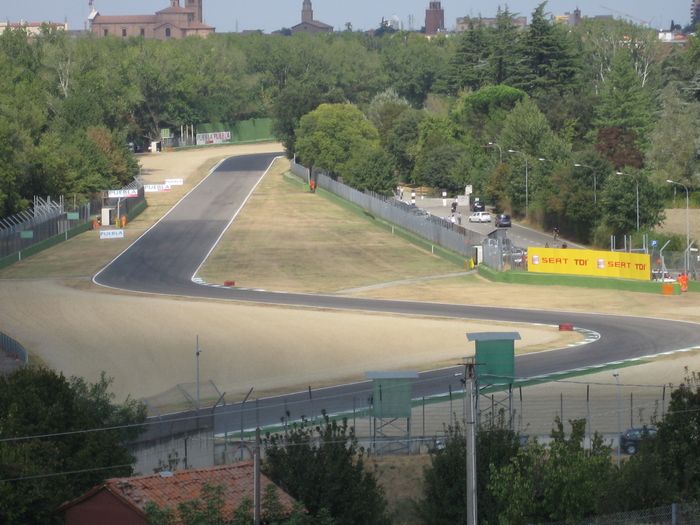 Imola Circuit, also known as Autodromo Internazionale Enzo e Dino Ferrari, is a historically significant race course in Italy. An old school circuit, dear to the heart of Formula One fans, absent from the calendar since 2006, until a triumphant return in 2020.
It's back again this year, and it's going to be worth the watch!

The circuit was inaugurated in 1953, and held its first-ever Formula One race in 1963 as a non-championship event. In 1980, the circuit became an official, championship Formula One race, hosting the 1980 Italian Grand Prix, the first time since 1948 that the Italian Grand Prix wouldn't be held in Monza.
The race was such a success that in 1981, the San Marino Grand Prix was established, allowing Imola to become a permanent race on the calendar, only to be removed in 2006 due to ongoing issues and a need for renovations.

In 2020, with the Coronavirus pandemic making a pig's breakfast of the regular calendar, some old friends returned. Among them was Imola, hosting the hastily christened Emilia Romagna Grand Prix. It delivered a classic show at a classic track, with fans all around the world screaming for more. In 2021, the Emilia Romagna Grand Prix is back on stage for an encore, and we are pumped!

A narrow road, winding through some dramatic elevation changes, with old-school grass runoff areas and some long not-quite-straight straights. This track inevitably leads to some on-the-edge racing, rewarding the daring driver, and punishing the slightest mistakes.

The track starts out with a long, slightly curved straight, leading into the left-right-left Variante Tamburello corner/chicane. Right off the bat, the drivers' talents will be tested. Over-cook it, and you're in the gravel, the line is tight and precise, and you'll need every little bit of speed you can carry through, because immediately after… There's a short straight to the left-right Variante Villeneuve chicane, another precision-testing twist.
Get that right, and you might have the jump on your opponents around the Tosa hairpin.
Get your foot back on the throttle quickly as you climb the hill and swoop your way around Piratella and back down the hill towards Acque Minerali, a couple of right-handers that lead into the next short straight.
Power your way up to Variante Alta, a tight chicane, take as much kerb as you dare. Take too little and you'll lose precious time, take too much and you'll lose a chunk of your car.
Back on the throttle again, sweep down an almost-straight to Rivazza, two right-angle turns that will test your ability to judge a breaking point, and the grip of your front right tyre.
Get that done, and you'll be back on the start/finish "straight", ready to do it all over again.

Watch Valtteri Bottas show everyone how it's done with his masterful qualifying lap in 2020 on YouTube.

Formula One has made a lot of progress in many fields over the years, and safety is no exception. The cars have strict guidelines to keep both the drivers and everyone else around the track safe. Multiple tethers preventing the wheels from flying off, a sturdy carbon fibre monocoque, the rigid "halo", and more.
The tracks that are raced on have been made safer too. Wider runoff areas and chicanes to slow down the overall pace are the two main ways tracks are updated to prevent regrettable incidents.

Imola is notorious for some of the most horrible of such incidents.
Tamburello was originally a flat-out sweeping corner, with very little room between the track and a concrete wall on the outside.
In 1987, Nelson Piquet suffered a heavy crash in practice, sustaining injuries that took him out of the race.
Two years later, Gerhard Berger had a similar accident. Saved from his burning wreck, he was nevertheless injured enough to miss out on the Monaco Grand Prix two weeks later.
1991 and 1992 saw two more incidents, Michele Alboreto and Riccardo Patrese wrecking at Tamburello, escaping with only a few bruises.

Finally, after too many ignored warnings, the infamous 1994 San Marino Grand Prix took place, killing two drivers, and injuring another, along with several mechanics and spectators injured.

During first qualifying, Rubens Barrichello hit a kerb at Variante Bassa, launching him into the air at high speed. The following impact knocked him unconscious, his injuries taking him out of the race.

Roland's death lead to the reformation of the Grand Prix Drivers' Association the next day. The drivers immediately began pressing for improved safety regulations.

At the start of the race, JJ Lehto stalled, and Pedro Lamy, not seeing the stationary car, slammed into it. Debris from the collision was sent over the fencing, injuring a police officer and several spectators.

Shortly after the debris was cleared and the race resumed, disaster struck again. Ayrton Senna lost control at Tamburello, slamming into the concrete barrier, and was killed instantly. In the wreckage, the officials found a folded Austrian flag that Ayrton planned to raise in honour of his friend Roland who had died the day before.

With the racing world in shock and grief, the reformation of the GPDA, and the very obvious need for safer racing, the 1994 San Marino Grand Prix marked a turning point in the philosophy around safety regulations in Formula One.

The Imola circuit was modified with extra chicanes.
New car design regulations were introduced in 1995, so significant that the teams needed to fully re-design their cars.
In 1996, the FIA began to work with manufacturer to develop the Head And Neck Support "HANS" device.
Track and equipment safety technology and rules have been continually updated and introduced over the year.

Senna would be the last driver to die in a Formula One accident for twenty years.

Issues with the kerbs and ageing infrastructure lead to 2006 San Marino Grand Prix to be the last Formula One race at Imola, ending a 26-year streak. The owners made some renovations in an attempt to stay on the calendar, but the reinstatement was denied.

Since 2007, the track has undergone more renovations, and it finally regained its homologation in 2011, and began to lobby for a reintroduction to Formula One.

The COVID-19 pandemic, upsetting 2020's regular calendar, gave the track the opportunity it was waiting for.

Imola Circuit, also known as Autodromo Internazionale Enzo e Dino Ferrari, is a historically significant race course in Italy. An old school circuit, dear to the heart of Formula One fans, absent from the calendar since 2006, until a triumphant return in 2020. It's back again this year, and it's going to be worth the watch!